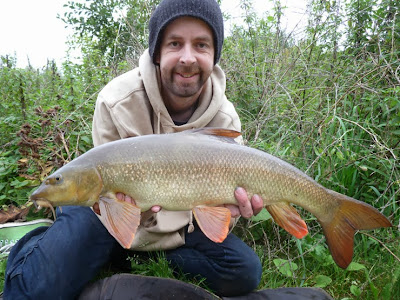 I knew exactly how I was going to fish this weekend if I could string a few hours together, a chat with a couple of locals revealed the barbel really aren't playing at the moment, especially during the day... And not only do I want to catch a fish, I need to do it quickly.

Kit was scaled right back, 5lb line, size 14 hook and a tiny pinch of bread for bait. I thought the gudgeon might be a pain, and first cast I started getting little knocks - until the rod ripped off the rest and made a break for the river... I just grabbed the butt and struck into thin air - how does that happen?

Half an hour later the same thing happened again, you would not believe it's possible to miss two bites like that - I did think about a bigger hook, but I was getting bites and the clock was ticking.

Next bite was against a tight bait runner and fish on - great fight on light line, and at one stage I thought it was curtains when it got snagged but eventually I had my fish beat.

Next problem - one I wasn't expecting, I couldn't reach the water with my landing net! I had to kneel on my rod, use one hand to hold on and the other to reach down with the net - and as I was nearly upside-down my phone slid out of my pocket... I grabbed it, stuck it in my mouth and as I steered the fish over the net my girlfriend rang... It was on vibrate!!