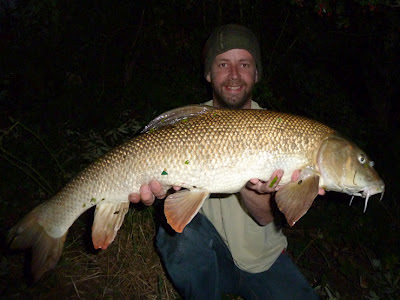 Short evening session with Dan and just one proper bite between us - my turn this time - a fantastic fight among the streamer weed, another hairy net job and a great looking double. Great photo - thanks Dan.

It's my biggest fish on a centerpin reel so far. I'm hoping to do some centerpin piking later in the year - and if this fight is anything to go on it's going to be a lot of fun.

Another Double? Unfortunately No! I checked the tail in the net. I know I wanted to track the weight of this fish but this isn't exactly what I had in mind. Same fish as Friday, same weight, 10lb 1oz, different swim and bait though.

For the Barbel Challenge purposes we're going to count her as a third double, but in reality it's my PB caught a second time... Still pretty chuffed though!

She swam away strongly and I hope to see her again - hopefully not until March when she's put on a pound or two..!

Many thanks to James and Bill. It will be interesting to see when the pre-spawning weight gain starts and if she's at the bottom of the curve now... But she probably won't reappear again for months!