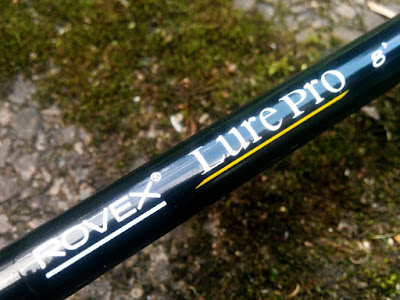 Well over a month later my replacement rod finally arrived from Tidal Tackle - a very long wait! The box it arrived in looked thoroughly beaten up, and I remarked to a friend there was no way the rod wasn't smashed - but I opened it and checked it out and was surprised it appeared to have survived being delivered by Mad Max.

I fancied christening it on the local river, stalking carp in the slower, deeper water. First up I baited a swim to come back to - and as I watched the cubes of meat hit the riverbed a barbel about five of six pounds was straight on it - too much to resist.

I quickly set up the new rod and the barbel nailed my bait straight away - one lunge and the rod snapped - WTF??!? I tried to play the barbel on the remaining rod but something got caught and the line snapped. F**K! 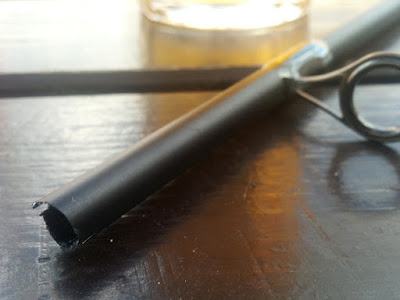 It's not just the expense (and long wait) I have very limited fishing time and that cast was my entire week's fishing - what a jip!

I'll be phoning Tidal Tackle on Monday and I'll publish the resulting conversations on here (and Google feedback, Facebook etc). Hopefully they will sort me out with a new rod - but I still can't get my afternoon's fishing back. 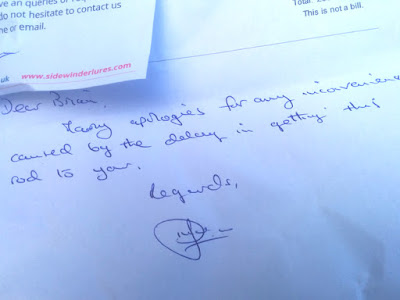 Edit: Just keeping track of this here (for a future post).

11 August (1 week)
2x emails went ignored. Got hold of someone on the phone who told me they were out of stock, took my number and told me they would "keep me informed" - they didn't.

9 September (5 weeks)
Rod arrives (to wrong address) in beat-up packaging, must be cracked because it snaps on first fish - 6lb barbel lost.

I did get a note which explained they had sent me a more expensive rod, £32.99 - five whole pounds more expensive (and something they had knocking about in the shop no doubt). So now I've waited over 7 weeks and spent over £50 on a £32.99 rod I don't want! And I bet they will want me to pay to send it back - I've given up, I'll get it from somewhere else.

Time to try and get my money back. But just in case I'm just composing my 'glowing review' for Yell, Facebook review, Google feedback etc...
Posted by Brian at 17:35