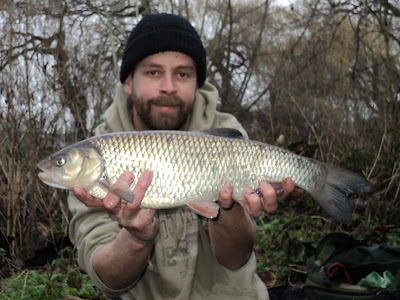 Getting better at these self-taken photos. 3lb 14oz

It was a milder day today in London, and as I haven't caught a fish all month, I thought I'd fish the last hour of daylight on the Wandte. I started fishing about 3pm and had my first bite about 10 minutes later. A tiny bite but connected with the 3lb 14oz chub above. About 30 minutes later I had another bite, this one wanted to pull the rod in, and went 3lb 6oz. I recast but the light was fading and I headed home at four. 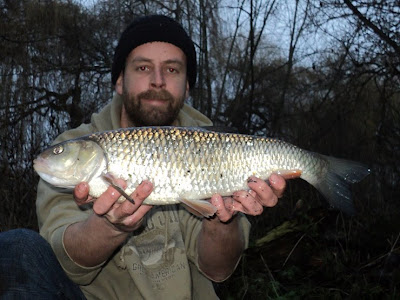 Not even wearing a coat! Must be warm. 3lb 6oz

Hair-rigged luncheon meat in about 18 inches of water did the trick. Chub aren't known for being hard fighting fish - but nobody had told these two - they both gave a great fight and I was convinced I was connected to a carp both times.

And just before I left a fox jumped over the wall I was sitting propped against, landing in my lap... Don't know who was more shocked me or the fox? I left him some luncheon meat for his effort (and for not biting me).
Posted by Brian at 17:39