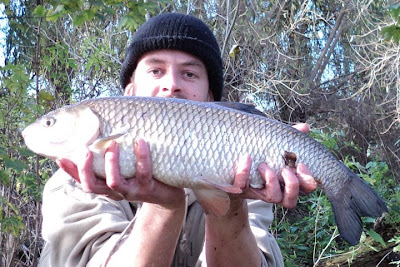 Well with my pike season being slow to take off I thought I'd return to trying to catch my old favourite fish, the chub. I've seen several big chub while scouting out the Wandte, unfortunately by the time you see them they have already seen you.

I opted for a swim I have seen chub in a number of times, about a foot deep with a two and a half foot deep channel, I tackled up well away from the edge and slid into position like a stealth-ninja! I couldn't see them - they couldn't see me.

I fished stinky old luncheon meat on the ledger. About half an hour later I had a gentle rattling bite and connected to a good fish, unfortunately I stood up, spooking the swim, the chub was about 3 pounds but collected a raft of weed before spitting the hook. Disaster!

I thought about changing swim or coming back tomorrow but opted to stay and hope they would return. About two hours of feeding the swim later I had another rattling bite and hit another fish, this time I got it - it's been a while - 5lb 2oz - my best chub for well over 10 years... Yay!

Also, inspired by my brothers fantastic photo albums I decided to make my own (an online version). I had a look at Flickr and a number of other photo hosting sites but in the end I made one from scratch - so it matched my blog. It's here.