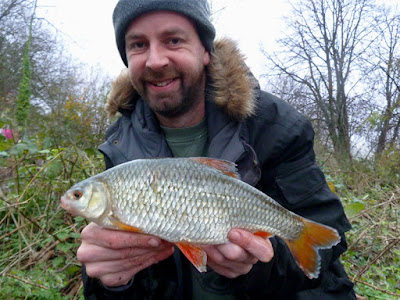 I know a bloke who has a specimen roach list longer than my arm, and although we fish together regularly I've never asked where he's caught them, he's never told. But when James asked me to join him on a specimen roach trip I jumped at the chance.

An early start and a train journey into the unknown - I really didn't know where we were going! We arrived at a very unassuming swim and set up in the dark.

No details about the fishing, tactics or location but the first roach was mine. A fantastic 1lb 4½oz fish - what a way to start the day!

Next up James landed one of his customary two pounders, cracking fish - but I'll leave that to his blog - I wanted one. 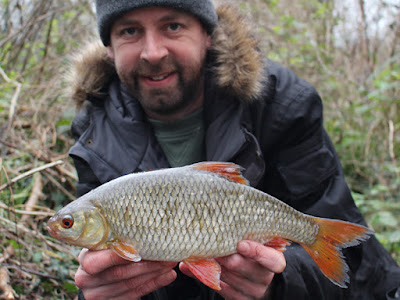 And after bumping a couple of fish I had my chance, and absolute beast of a roach - which made sure we both got a very good look at her before shedding the hook - agggh!!

The problem it seemed was my hook, both me and James use barbless hooks - but experience has shown James that a micro-barb is the key to keeping big roach on the hook - how I wish I could turn back time.

But to be honest I had my pounder and the day was made. And my next fish provided my best roach brace ever, weighing in at 1lb 10oz. James then beat this one as well!

All too soon our 10am deadline arrived, but four cracking roach between us was better than either one of us had expected. Thanks James, and don't worry your secret fishing spot is safe with me - unless someone out there has a very big bribe!! 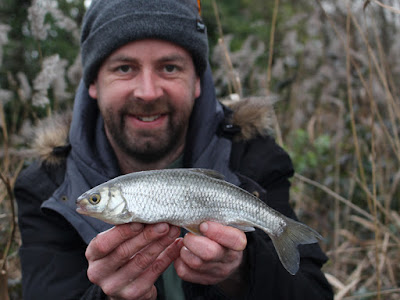 But the day was still young and we had our fishing gear so we headed to James' secret rudd spot. Another couple of train journeys found us on a different river and a different spot - but weirdly one I'd fished on my own before - although I had no idea there were rudd in there.

Unfortunately no rudd, so we headed for the secret dace spot. Actually I knew where this was, I've photographed some of James' specimen dace for him here before (they are incredibly difficult to photograph on your own).

And soon found myself photographing one for him again! But I did manage a modest step up in my PB with a 10¼oz dace to round off a fantastic day. Cheers James.
Posted by Brian at 19:45