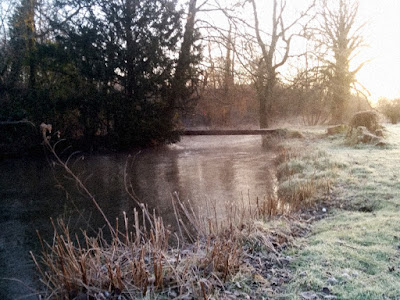 We were on the frozen riverbank just after dawn, James and myself, the target was grayling and roach. James had lent me a Greys Prodigy float rod for the day - and it is a perfect centerpin rod - why don't they make a 3 piece version?

I also took the pike kit, I only needed 2lb 5oz to wrap up the predator challenge - one fish - and I was sure I'd bump into one over the course of the day. 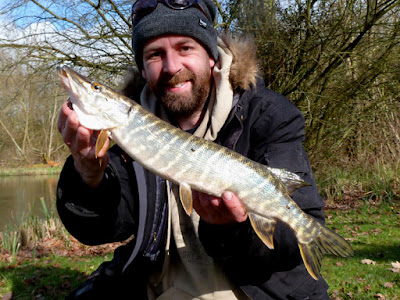 I was soon into the grayling and trying to avoid the kamikaze trout (I caught the same trout with a distinctive black mark three times in ten minutes). But as the morning progressed I couldn't find a pike - where were they?

I abandoned the float rod and wobbled a deadbait in likely looking spots, eventually finding a little jack. Never has a pike of this size been so carefully weighed - 1lb 10oz - turns out I needed more than one pike! 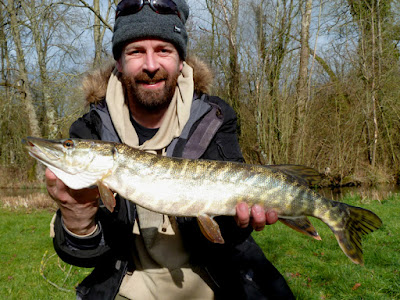 After much more searching I finally spotted a little jack in the shallows - 3lb 9oz - challenge cracked - I breathed a sigh of relief, I've been so close for so long.

I continued chasing grayling catching quite a few (lost count) to about 1½lb and far too many trout to about 4½lb (a nice test for the Prodigy). But we didn't see any more pike, no big grayling and only a handful of roach. James did land a couple of them including the most beautiful one either of us had ever seen - a black roach! 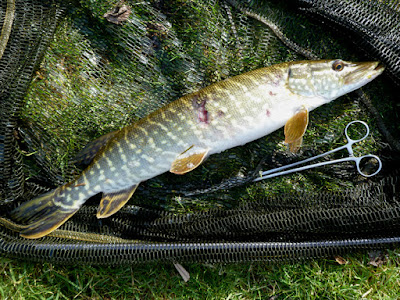 One deadbait left, I flicked it out and it was nailed instantly - a pike about 2lb - with marks where it looked like it had been grabbed by an otter!

It looks like the otters have taken their toll on the river, introduced to an ecosystem that can't sustain them - I really hope I'm wrong and we just couldn't spot the fish - the trout will be restocked but not the roach, grayling and pike.

We only stumbled onto this little slice of paradise last year, it would be such a shame if it's already gone...
Posted by Brian at 22:58