Two And A Half Hours 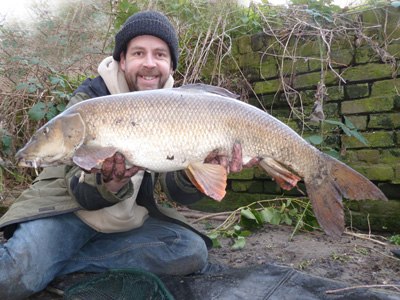 I was at work with things pretty much wrapped up for the day, and was having a chat via email with a mate about fishing... I worked out that if the trains were on my side I could fit two and a half hours on the riverbank in - I made a dash for it - fishing is better than talking about fishing!

I was going to head for two spots I'd baited up on Monday, spending about an hour in each. The first spot looked devoid of life, the second spot produced a knock within a few minutes... But I waited the full hour before I had a rip-round bite and was obviously connected to a big fish.

Holding the rod in one hand I grabbed my bag and the net with the other and followed the fish downstream. After crashing through the undergrowth and a fantastic fight which saw the fish at the net three times before it made another surge across the river, I finally got the net under her.

A new PB barbel - brilliant! After a quick couple of photos and making sure she swam away strongly I ran for my train (with a massive smile on my face). And to think I nearly didn't go. 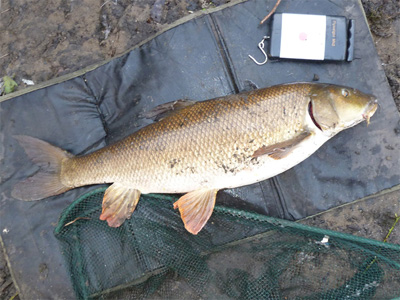 Edit: With this fish being re-captured just before the end of the season and the weight published on another site, I thought it wouldn't hurt to put it on here. A new PB of 12lb 4oz - absolutely over the moon! (James had her a couple of ounces heavier two weeks later).

Top work Lee, who guessed the weight bang-on in the comments - and they say I hold the fish too close to the camera!
Posted by Brian at 18:13