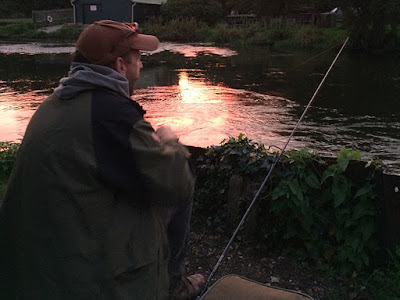 Bloody hell, that went quick - but I did manage more time on the riverbank than I thought I would this summer. Here is a quick look back at the closed season and the summer river season before it's wooly hats, floods and frozen fingers time...

I achieved a target I've been after for a few years; a pound plus roach from the local river - a 1lb 2½oz beauty - my fish of the month and I hope to bank one or two more through the winter.

August: A trip to The Wye provided a start to the Predator Challenge in the shape of perch, including two over 2lb - I really want to beat my PB this season and would love a three pounder.

I also added trout to this season's species list, normally caught while fishing for something else I had a great afternoon targeting them. And took my barbel tally to 70 fish - would love to see 100 this season but perhaps I should really focus on catching a double.

A recce to The Royalty will hopefully come in handy with the pike season and we've made a start on the local zander fishing. An afternoon on the local river took my total to over 80 barbel, the 100 target is in sight.

Predator Time: A few trips already planned to The Royalty, Test and Wye - and I have my mind on some proper monsters next month...