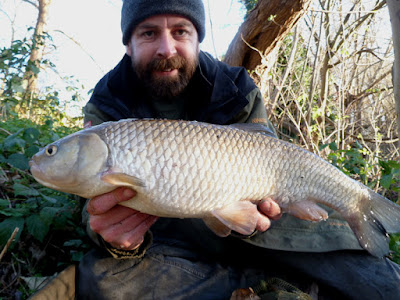 Well the first session of the year was a blank, not the way I like to start, perhaps chasing a rare pike on a new canal wasn't the best way to start the year. And since my stickleback / dace trip I've been out with James a couple of times - but I was stuck in a slump.

Dace fishing, the first trip I was mostly and observer - exploring a fantastic new stretch of river - but I did have a few casts so it was officially a blank. Yesterday we went out for a few hours, again chasing dace.

I had stuff to do in the morning and by the time I got there James had landed two - both big, check his blog - but it was tough fishing. They were the only dace we saw all afternoon but a trout saved me from a blank. And James Snr had a cracking trout - yeah, they're out of season but they spawned weeks ago. 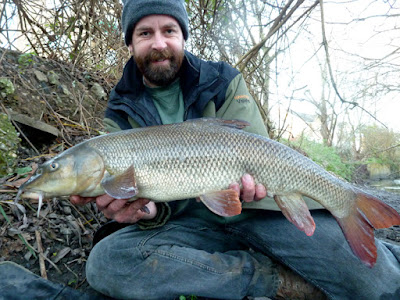 Two thing occupy my time at the moment; the biggest game launch I've ever been involved with and watching The Wye water levels - up and down like a bride's nighty! But I had set aside a few hours this afternoon. Time for my old favourite: chub.

And I'm glad I dragged myself to the river - 4lb 6oz (top) on rolled meat, on her way towards the net she was accompanied by several shoal mates - and she wasn't the biggest of the bunch - but they were spooked - I'll be back!