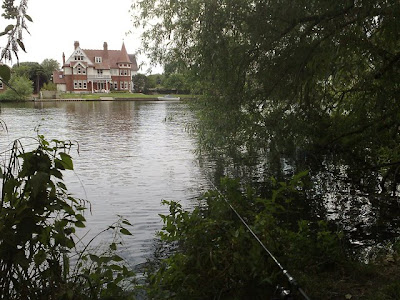 Zander: My first fishing trip to the Thames was last thursday, I lure fished between Kingston Bridge and Teddington Lock looking for the elusive zander. I always think lure fishing is a good way to explore a new water and I did as much walking and talking to the locals as I did fishing. Sadly I didn't see any zander or perch or jack pike or magic lamps for that matter, but I did start to learn about the water.

Bream: So today I targeted bream, after talking to some local anglers I found a swim that was producing fish at the start of the season (while I was in France) and a bait that is working well at the moment, sweetcorn. But despite an early start and a late finish I didn't disturb any bream - I think I need to read more about them as I'm basing my fishing on Wye chub and barbel fishing. Throughout the heat of the day I kept returning to my swim to add more bait while I went stalking perch.

Perch: While zander fishing on thursday I did see some nice perch lurking in the shady spots and although I couldn't temp them with a lure I know they find it hard to resist a float fished worm.

Using polarised glasses I was able to target the larger perch although the small ones seem much faster and more greedy. I had 18 perch around the 8oz mark, no big ones but at least I caught some fish. After running out of worms I went back to my (unsuccessful) bream fishing. 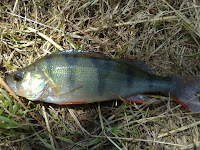 I did have some good news, talking to a local angler I found out someone had caught a zander, a perch just over 3lb and one just under 3lb on a lure last week... And I know where they were fishing...
Posted by Brian at 22:45 No comments:


Popped down to the local pond at lunch time and the carp were spawning. Video captured on my camera-phone.

Also, I mentioned to a couple of local anglers my plan to catch a Thames zander, and was told 'you stand more chance of catching a magic lamp'. We'll see how it goes...
Posted by Brian at 14:15 No comments: