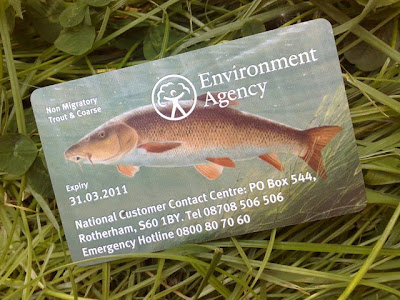 With less than a month until the season re-opens, my thoughts have turned to fishing... So here are a few plans:

1 Catch a Zander
I've never caught a zander (or even seen one) but I am told there are some in the Thames about an hour away from where I live. They are pretty rare so I've been doing a lot of walking looking at swims, spent quite a bit of time on Google Earth and read everything I can get my hands on about zander. While I'm there I will probably have a go at catching a bream, another species I haven't caught before.

2 Beat Dan in a Fishing Competition
After last year's perch match we have decided on two new competitions. A make your own fishing rod, reel and tackle (except line and hooks) competition, 1 point for furthest cast, 1 point for most fish caught and 1 point for the biggest fish.

And a 99p shop fishing match, there are shops in London that sell everything for 99p, so with a budget of £5 each we'll have to buy a rod, reel, tackle and bait - most fish in 5 hours 1 hour wins.

3 Catch a 30lb River Wye Pike
I've been trying for about 20 years, but you never know this might be the season...

I'm sure I'll be after other fish, the carp in the local pond look very tempting, I was watching them sunbathing yesterday. Very tempted to go after some sharks, stingrays and red drum with Paulos from sharkblog.net, basically if it's got fins I'll try and catch it.