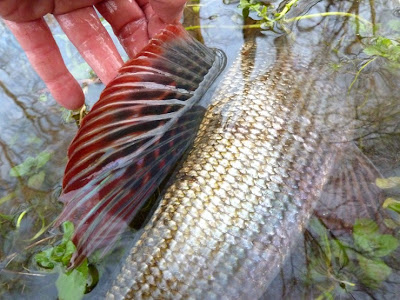 With the end of the season in sight me and James decided to treat ourselves to a day off work and a trip to the Test Valley. The grayling challenges had been met, time for a relaxing day's fishing - no targets except to enjoy ourselves. And this time we were joined by James Senior. 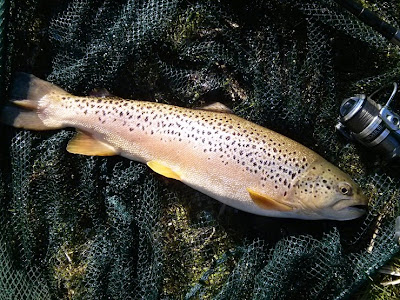 While Senior and Junior targeted grayling I targeted pike but due to the rain over the past few days I couldn't see the fish well enough to stalk them in the slightly murky water, and as I soon found out fishing blind meant the trout would get there first. I landed 4 trout to about 4lb on sprats, and many more sprats were nicked or shredded - about midmorning I gave up. 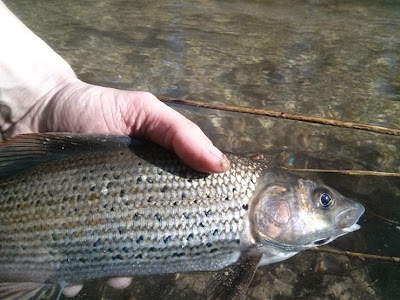 I set up the stick float on the pin and went chasing ladies, which was the right move - landing a couple of dozen of them over the next few hours. I weighed the best three, 1lb 13½oz above... 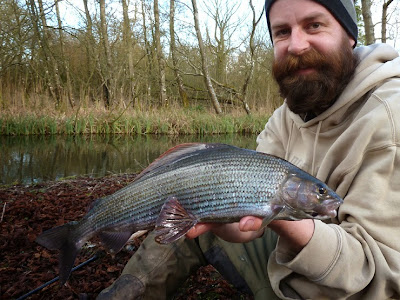 A 1lb 12oz grayling above, while James was handy to take a photo... 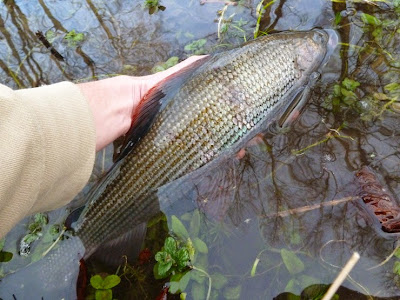 And a 1lb 15½oz fish above, really wish this one had had a bigger breakfast!

By the afternoon both James' had beat their grayling PBs, blog details here, and despite the lack of pike it was a great day all round. Then, out-of-the-blue I caught a 14oz roach - might not sound like much but it was my biggest roach for a long time, I'd found a challenge - I wanted a pounder!

I stuck it out in the swim, reasoning where there is one there will be more. And almost had my chance loosing one that looked a stocky pound. As the sun set and I was down to my last cast I got one! Hours of trotting under the same tree and I beat my 18 year old PB, a 1lb 12oz beautiful roach was in the net - brilliant!

A new PB each, what a trip, and what a roach. Again thanks to Chris and the guys - tonight I dream of Roach!! 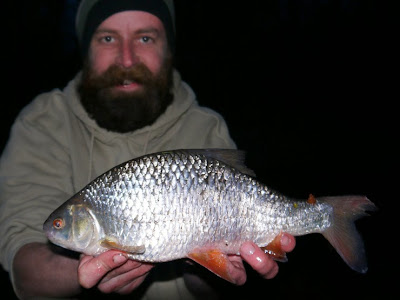 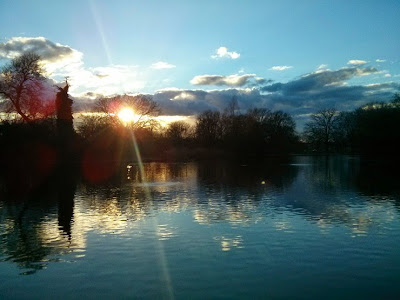 Well after 22 barbel sessions without a blank it had to happen sooner or later - I haven't blanked for barbel since June, so I can't really complain. I did have my chances, loosing two barbel, one of them right at the net - in the end I had to settle for a consolation chub.

The afternoon was spent trying to find a pike in a local pond - not even a run. To be fair I'm not sure there are any pike in there, it may just be a fools errand... But I'll give it a few more tries...
Posted by Brian at 18:53 15 comments:

Email ThisBlogThis!Share to TwitterShare to FacebookShare to Pinterest
Labels: Blank

A Glitch In The Matrix 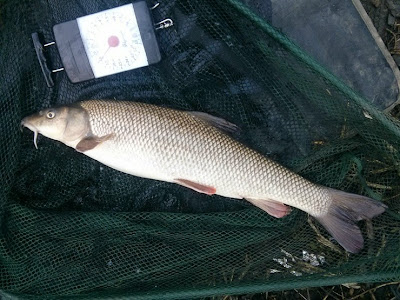 I could tell as soon as I arrived the gudgeon wouldn't want to play today, the water was high and grey - but I still gave it 2 hours spread over three swims for one missed bite. I did bring the rolling gear and hoped a barbel would save the morning.

I tried half a dozen swims without a touch, it's difficult if you can't see them. But first cast in a fast run was nailed. Great fight in the fast water and a 4lb 7oz barbel was in the net. Where there is one there are often more so I returned the fish a few yards downstream and let the swim settle for 15-20 minutes before lobbing out another bit of meat...

Nailed straight away, another great fight and a second 4lb 7oz barbel was in the net. Or was it? Both exactly the same weight, both had a bump on their dorsal fin. I've caught the same pike twice in one session several times, and on one occasion in consecutive casts - but I thought barbel were smarter than that.

Camera phone photos on the bank were inconclusive, but I was pretty sure it was the same fish - I even text James. Photos side-by-side on the computer revealed they were different fish, it was just a glitch in the Matrix. 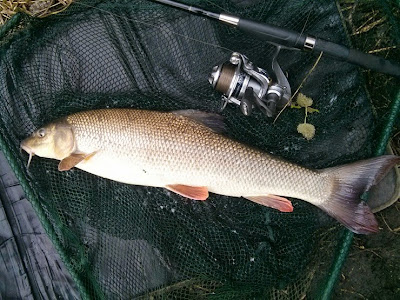 With horrible water conditions and a couple bonus of barbel on the scorecard I headed for home, working it out on the train - the total for the season is 297lb 2oz, I need a 2lb 14oz barbel to hit my target - just under a month to go... 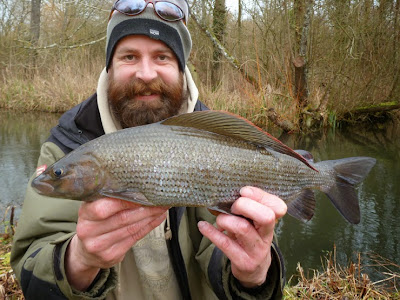 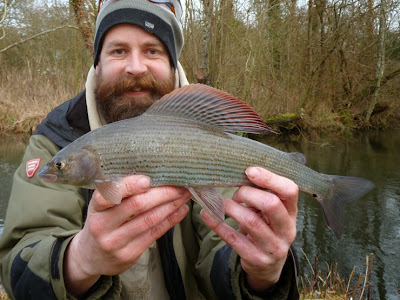 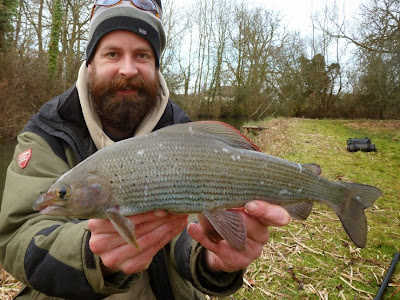 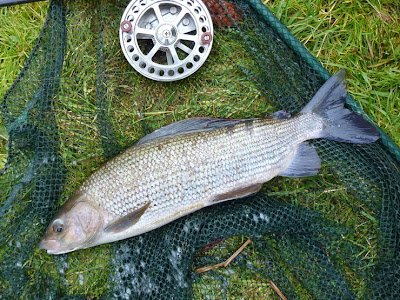 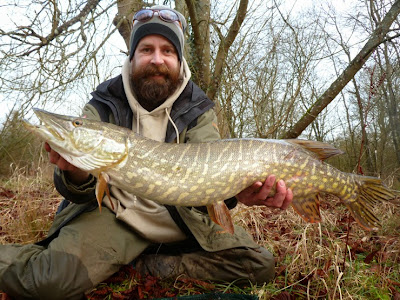 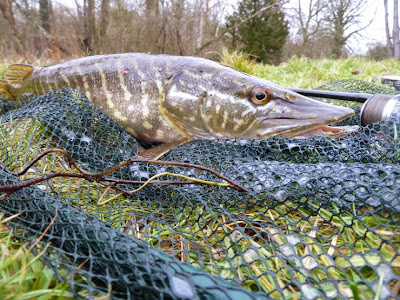 Facebook Update: Well I was after an initial target of 50 'likes' on the Jack's Pike Facebook page, and the total was over 500! So a massive thank you to everyone who liked, followed and shared. And another massive thanks to Mike Pike who published it on his fantastic Pike-In_Lens page.

Help spread the work of Jack, page is here - cheers.
Posted by Brian at 08:01 No comments: 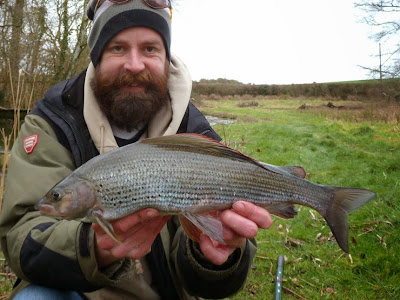 A five o'clock start and a walk through the snow was the order of the day on Saturday, I soon met James and we drove south in search of grayling. An hour or so later we arrived at probably the most beautiful stretch of river that either of us had ever seen.

The river was gin-clear and averaged about 1-2 foot deep, ideal for a bit of fish-spotting and trotting with the centerpin. But it was cold, we were both going to get blue fingers today. 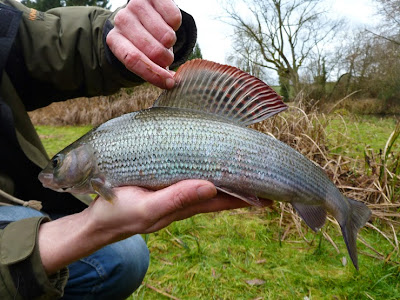 I started fishing a deep hole and it didn't take long to find my first grayling, a fish about 10oz, followed by my target, a 1lb 1oz grayling. My new PB which I was going to better several times during the day.

I soon discovered it was going to be easier to target the fish in the shallow runs, and easier to avoid the ever hungry trout. We moved down the river, each spot more beautiful and fishy than the last. 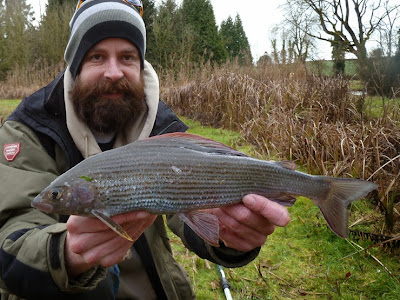 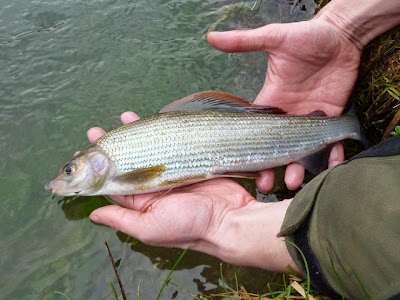 James really struggled with the trout beating the grayling to the bait in the beginning, so I was delighted when I saw him sprinting round the corner with a new PB resting in the net just down stream - but I'll leave the details to his blog.

We tried to avoid the trout the best we could, but I must have landed a couple of dozen of them, out of season brown trout and a sea trout, but there were about half a dozen rainbow trout mixed in - I weighed the biggest, a new PB of 3lb 1oz, great stuff. 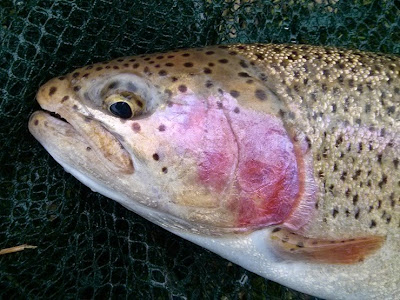 We both had a fantastic day, dusk came far too quickly and we really didn't want to leave. So it's a massive thank you to James for all his research and driving duties and another massive thank you to Chris for pointing us at the fish. I could have happily spent the rest of the week fishing here, even in this cold!

Well that's not quite the end of the story, with a new PB each under our belts we headed for a slower stretch where James couldn't resist targeting (and catching) a big roach, while my attention turn to pike - landing this 11lb 1oz pike on a wobbled deadbait. A real red letter day! 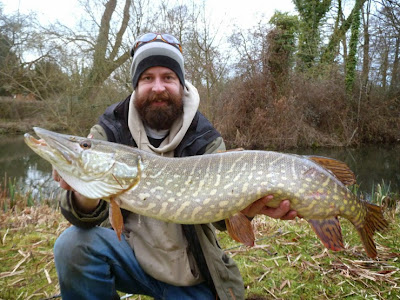